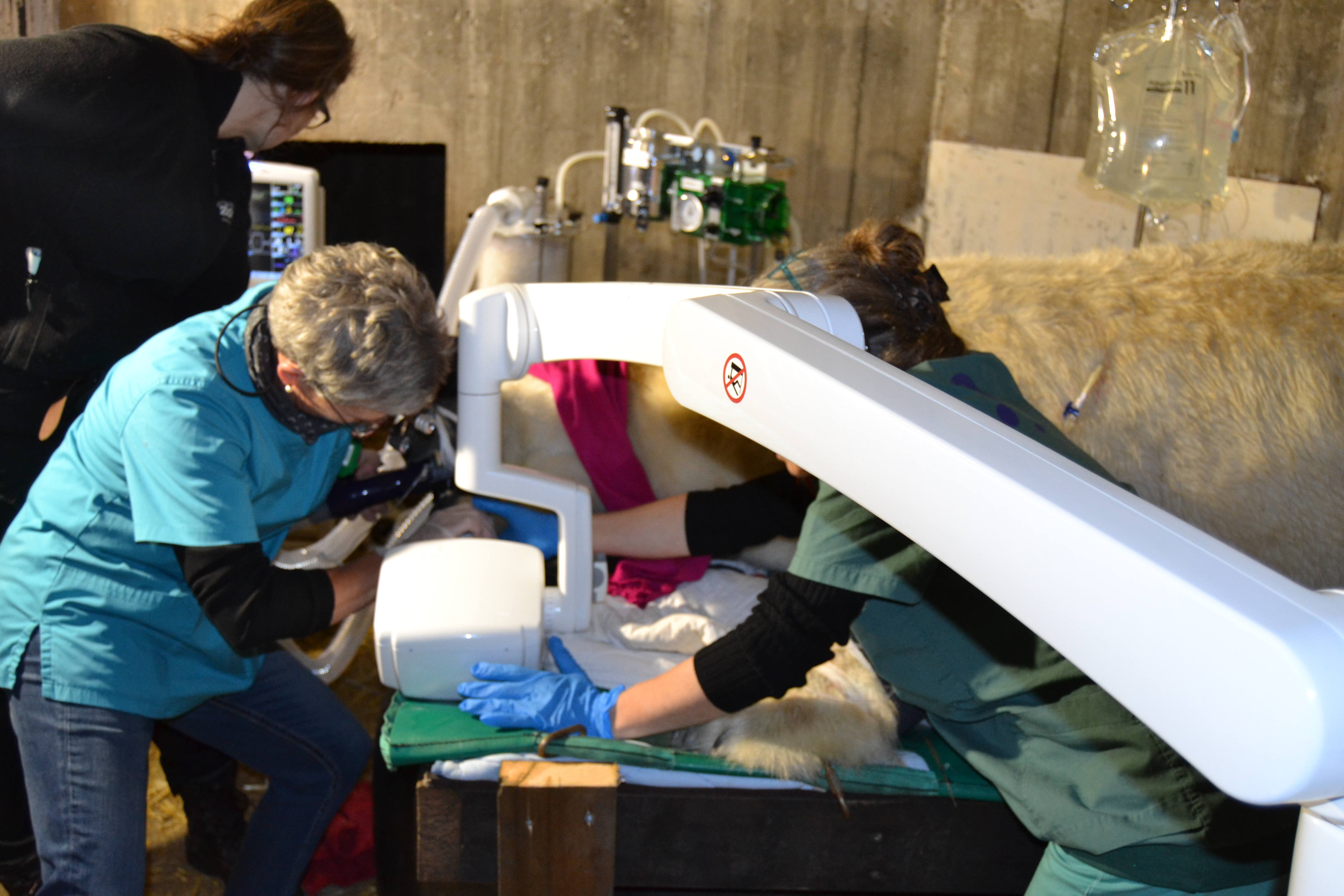 The Ranua Wildlife Park is home to polar bears, as well as 50 different other arctic animal species amid the northern woods of the Lappish wilderness of Finland. In the early autumn 2019, the resident 15-year-old female polar bear, Venus, was observed to eat poorly and repeatedly rubbing her left jaw with her paws. The wildlife park’s dedicated staff suspected one or more of her teeth might be causing pain for the sow. Veterinary professionals from across the Nordic countries quickly assembled in Ranua to perform a unique dental treatment with the assistance of the Planmeca Group.

The subtle changes in the behaviour of Venus the polar bear did not go unnoticed by the veterinarian of Ranua municipality Maarit Hyypiä, who takes care of the wildlife park's animals. She quickly assembled a highly skilled team of veterinary dental diplomates from across Northern Europe for the sow’s dental procedure with the help of Anne Karttimo-Mäkynen of Oulu, Finland.

Board-certified Veterinary Dental Specialists Hanne Kortegaard, Head of the Dental Clinic at the Companion Animal Hospital at Copenhagen University, was called into service due to her experience with polar bears’ dental treatments along with Helena Kuntsi, the Head Veterinary Dentist at the Anident veterinary dental clinic. Additionally, the head veterinarian of the Korkeasaari Zoo Sanna Sainmaa, and Helsinki University’s equine veterinarian, Anna Mykkänen, participated in the project as experts in anaesthesia. The team reached out to Planmeca Group to provide the support of equipment and innovation experts.

The assembled project team started to plan the dental operation thoroughly. Because a polar bear sow can weigh up to 300kg, it would be impossible to move her after she is anaesthetised. Therefore, it was necessary to treat Venus under very challenging circumstances – in her cool and dim den – a confined space for a procedure involving multiple specialists. A temporary dental clinic including lighting needed to be rapidly constructed in the den once Venus was ready for examination and treatment.

Root canal treatment for the polar bear in 56 minutes

Thanks to the care of the wildlife park’s staff, the project team had a relatively good idea of the treatment the polar bear would probably need. The veterinary dental specialists decided to limit Venus’s time under anaesthesia and treat only one tooth and perform a dental check-up for the rest of the teeth.

As a result of the seamless cooperation, the dental operation was finished in approximately three hours after the animal was sedated. There was no time for any delays since the polar bear is the most dangerous anaesthetised animal for humans among all captivated animals. 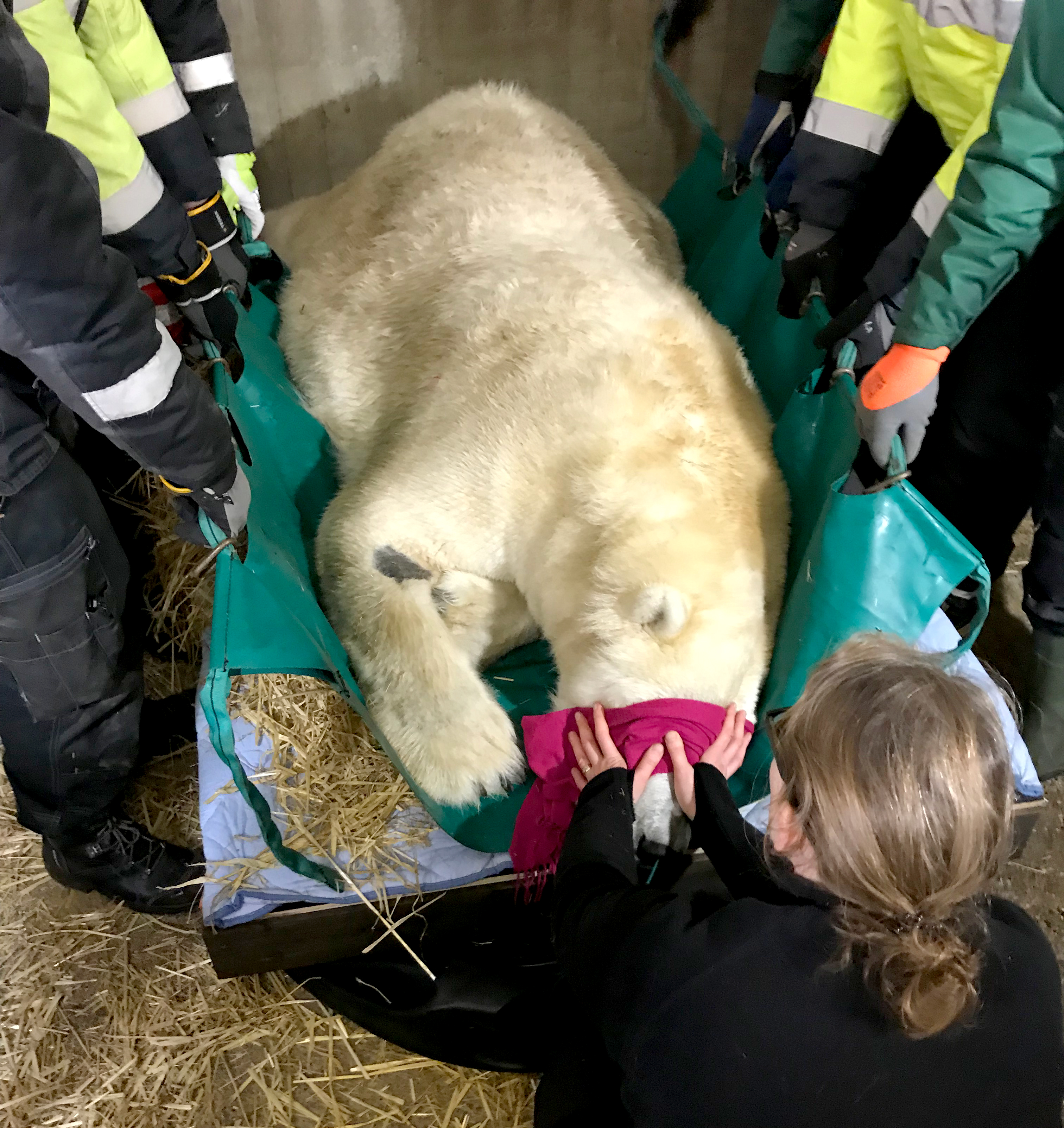 The firefighters of Ranua lift the polar bear onto the treatment table.

Once Venus was under anaesthesia, the den filled with the dental suite equipment. The firefighters of Ranua assisted by lifting the polar bear and the Planmeca ProX™ intraoral imaging unit was used to image her left lower teeth. The X-ray revealed a diagonal fracture in the polar bear’s left lower canine tooth near the gum line. Due to her vast experience in veterinary root canal treatments, Dr Kuntsi was tasked to perform a root canal. Along with assistance from Dr Kortegaard the procedure was completed in 56 minutes.

‘’Before we saw the X-rays, we did not know if the root canal treatment would be enough to solve the problem. We also prepared to remove a tooth but luckily did not have to take that traumatic action, due to the limited time frame and difficult aftercare. Fortunately, the root canal of the canine tooth was not cramped or very long, so that we could treat the patient in the time frame,” Helena Kuntsi says. According to Kuntsi, the treatment did not differ dramatically from the root canal treatment of a large dog. 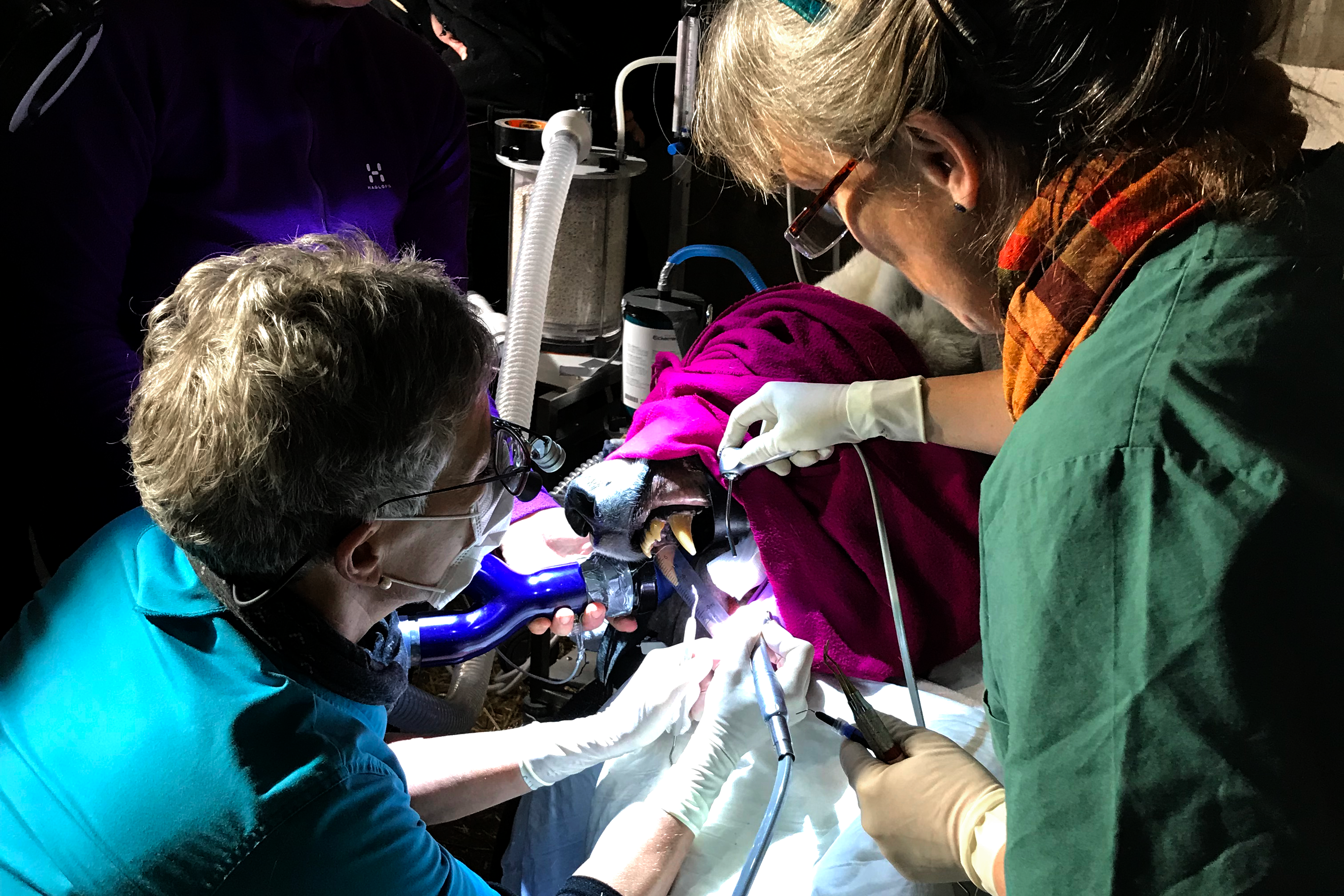 Seamless cooperation the key behind success

Unconventional circumstances introduced challenges not only for the treatment itself but also for the materials and equipment used in the operation. The mobile Planmeca ProX proved functional in the small space of the polar bear’s den where the equipment needed to be moved quickly in and out.

The patient’s position further complicated the imaging procedure. Due to its weight, Venus’ head could not be supported over the edge of the table, as planned. The team was able to rotate the front side of the polar bear to her side for the X-rays. Plandent’s Technical Product Specialist, Sami Karttunen, assisted by capturing the X-rays and speeding up the imaging process. 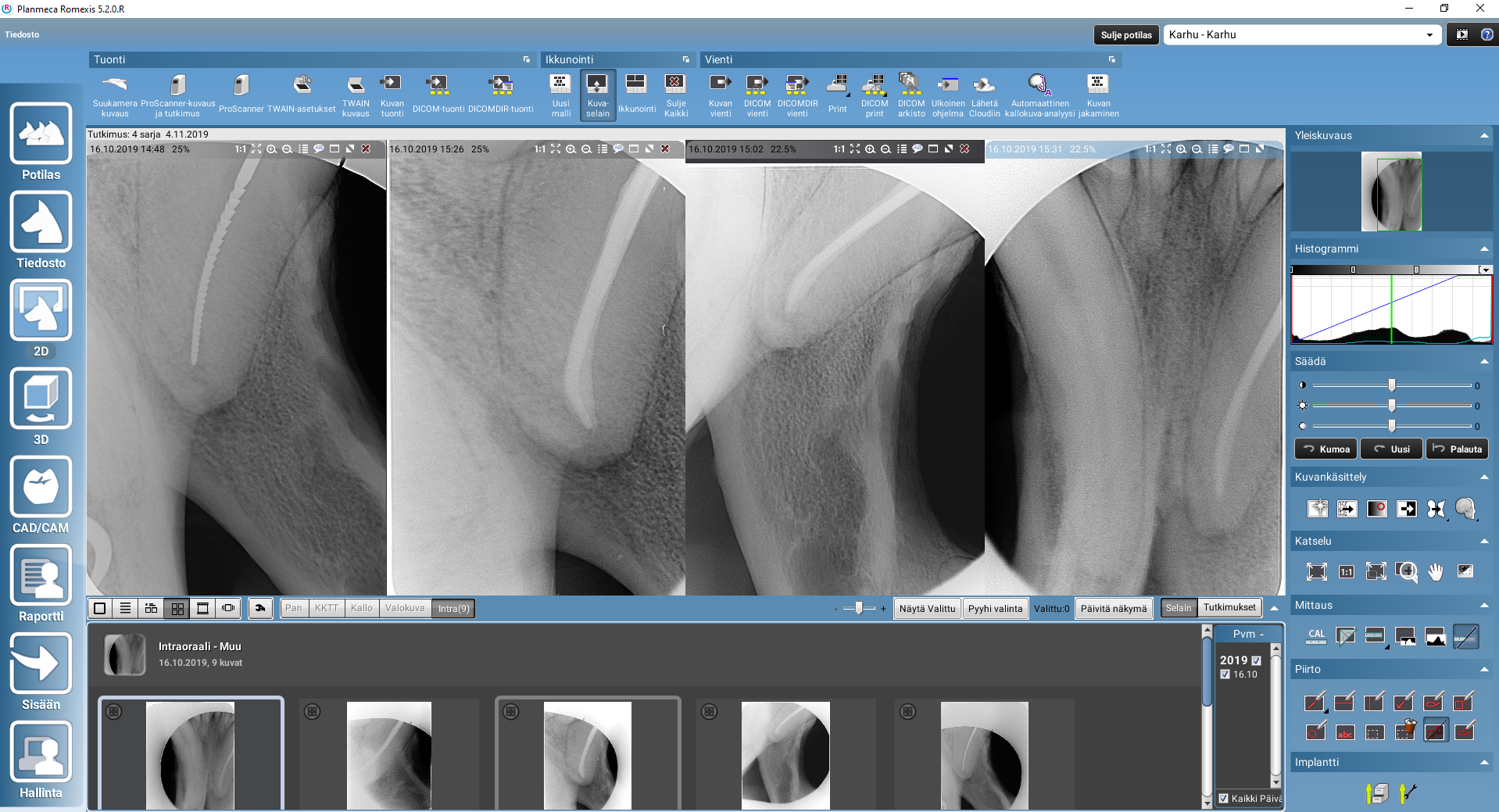 Planmeca Romexis® software shows the images of the tooth.

During the treatment itself, the use of consumable materials was not entirely uncomplicated either. “For instance, chemical-curing materials did not cure as normal when the environment is frigid. The root filling material that I used had also hardened because of the low temperature,” Kuntsi summarises. “Luckily, Hanna and I were prepared for the treatment with a huge number of different instruments and consumable materials. Fortunately, the root canal files and drying posts were long enough for a polar bear tooth.”

“It was absolutely amazing to observe how seamlessly these veterinary professionals immediately worked together – although this was their first experience as a team. It was fabulous that the Planmeca Group could also assist by delivering imaging devices and expertise, as well as LM-Dental’s hand instruments,” Helena Sundberg, Sales Manager for Planmeca Group’s veterinary solutions, recapped. 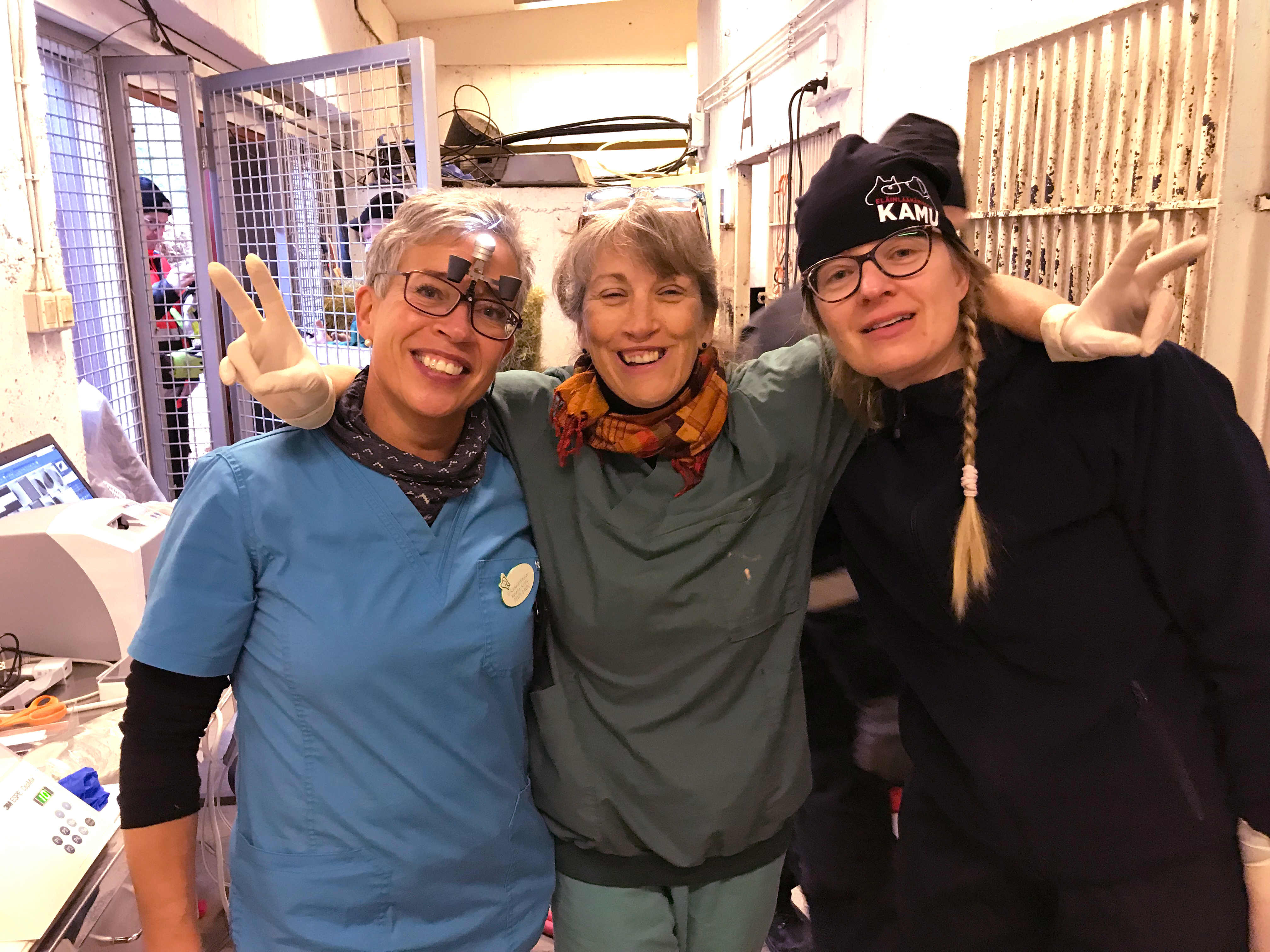 Ranua Wildlife Park
Ranua Wildlife Park, established in 1983, specialises in arctic and northern animal species. Female polar bear Venus and her son Sisu are two of the 200+ inhabitants residing in the park. The wildlife park is located in Finnish Lapland, in the middle of northern conifer forests, which is the natural habitat of most of the park’s animals.
www.ranuazoo.com

Polar bear (Ursus maritimus)
Polar bear is the largest land carnivore currently in existence. Adult male polar bear can measure up to three meters and weigh up to 600kg. The marine mammal is a skilled swimmer and perfectly adapted to living in the Arctic areas. The polar bear is listed as a threatened species due to the recent decline of its population as a result of climate change.